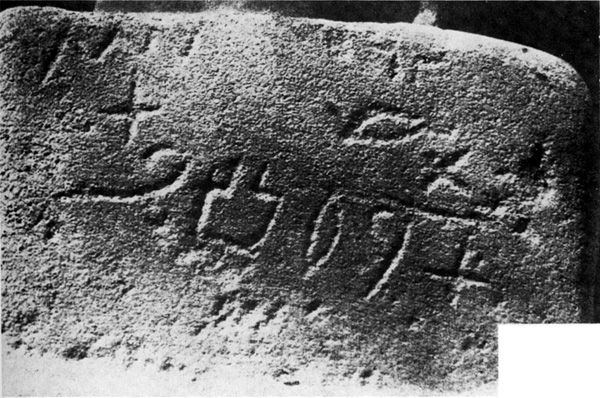 Proto-Sinaitic script, also known as Proto-Canaanite script, is a pre-cuneiform alphabet that originated in the Sinai Peninsula in the late 19th century BCE. It is believed to be the oldest known alphabet in the world, and is thought to have been developed by the ancient Semitic-speaking people of the region.

The origins of Proto-Sinaitic script are still largely unknown, and there is much debate among scholars as to how it came into existence. The debate over the origins of the Proto-Sinaitic script, centers around the question of whether the script was developed independently by the ancient Semitic-speaking inhabitants of the Sinai Peninsula, or whether it was derived from an earlier, non-Semitic script. Some scholars argue that the script is a local invention, developed by the Semitic-speaking people of the region as a way to record their own language. Others believe that the script was derived from an earlier, non-Semitic script, such as the Egyptian hieroglyphs or the Proto-Canaanite script.

However, other scholars have pointed out that the Proto-Sinaitic script also contains many unique features that are not found in other scripts, such as the use of diagonal lines to represent certain sounds, and the use of dots to distinguish between different consonants. These features suggest that the Proto-Sinaitic script was developed independently, rather than being derived from an earlier script.

Regardless, what is known is that it was a major step forward in the development of written language, as it was the first known script to represent the sounds of a language rather than just its ideas or concepts.

Proto-Sinaitic script was used primarily for religious and ceremonial purposes, and was inscribed on various objects such as pottery, stone, and metal. It is thought that it was used by the Semitic-speaking people of the region, including the ancient Hebrews, to record their religious texts and rituals. Some scholars have even suggested that it may have been used to write the earliest versions of the Bible.

The sound of Proto-Sinaitic script is largely unknown, as there are no recordings or written records of how it was pronounced. However, it is believed that it would have sounded similar to other Semitic languages of the time, such as Hebrew or Aramaic. Some scholars have even attempted to reconstruct the sounds of the script based on its known phonetic values, but these are only theories and are not widely accepted. 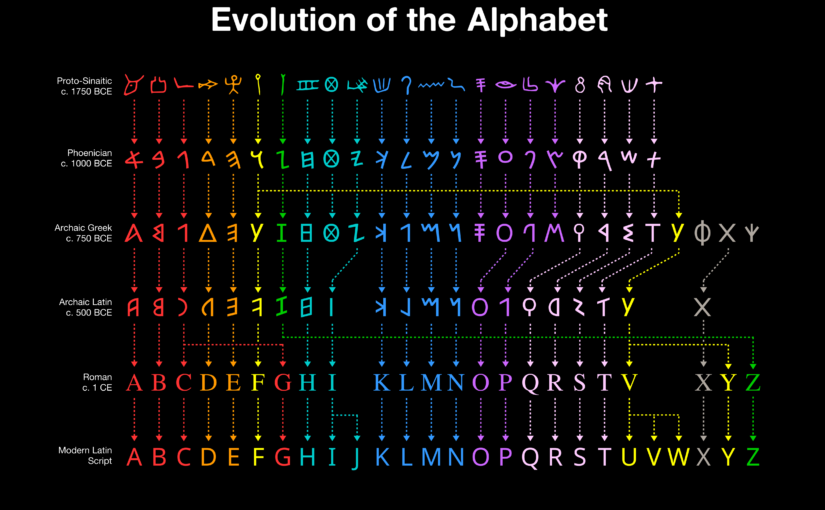 Found this amazing chart on the history of the English (or Latin) alphabet, made by Matt Baker. You can download the hi-res color version here.

A few interesting tidbits I’ve recently learned about our alphabet, from the smart people on Reddit:

For my book, I’ve been looking into the history of alphabetization. The major work in the field seems to be Lloyd W. Daly’s Contributions to a History of Alphabetization in Antiquity and the Middle Ages, written in 1967. It’s a short work of intense scholarship bring a huge breadth of knowledge to bear on a tiny sliver of a topic…like using the Hubble telescope to help you pull out a splinter. Lots of fun.

a list of authors, not in alphabetic order, and of their works with a numeral key to indicate where in a list of 183 monasteries each work might be found. This early union catalogue was apparently compiled as an aid to wandering Franciscan preachers who might be looking for material for sermons anywhere between St. Andrews’ and Sarum. (p. 77)

The first catalog of a distributed library system. Cool!

For my purposes, I’m struck by scattered examples Daly gives of early alphabetical lists that leave blanks for later entries. The earliest alphabetized list he found dates to the 3rd century BCE on the Greek isle of Cos where 150 names are inscribed in stone. The names are broken into three lists, and each is alphabetized. One of them leaves blanks, presumably for names to be filled in later. (p. 44-6). He also refers to papyrus rolls from the 1st Century BCE in Egypt that kept track of the various tax payments individuals made. Since the entries were updated throughout the year, the ledgers had to leave blank space for each person. At the end of the year, some of the more active individuals’ spaces would be crowded with entries, and other individuals would have lots of white space. (p. 44-6). That’s the limitation that space and time impose when you are stuck organizing your information in the physical world.

The great French encyclopedia of the 17th Century hit exactly the same limit. Enlightening the World, by Philipp Blom, points out that the editors had to decide ahead of time what all the entries and cross-references would be since they were creating the Encyclopedia as a series of volumes, published over time, in alphabetical order. Imagine if Jimmy Wales had had to specify all topics and links in order to get Wikipedia built? Hah!

Disclaimer: Before you start following these rules in the office, it’s a good idea to double-check with your employer about the alphabetizing rules followed in your company. There are different versions of filing rules so filing practices differ from company to company.

It’s important for every business to have their employee information, company records, and other important data maintained in a proper and systematic manner. The  way most companies do this is by alphabetization. The process has quite a few benefits as well. For instance, having a standardized filing practice means documents will be easier to find, you can add or remove new entries without disturbing other entries, and alphabetization is an intuitive process so people other than employees can understand it as well.

There are three versions of alphabetical filing rules:

For this article, we’ll be focusing on the unit by unit version simply because it covers pretty much all the rules. Here we go:

Numbers go first. Arabic numbers (0-9) are indexed numerically before alphabetic characters. However, keep in mind that they are NOT spelled out. For instance, 21 Horses Inc. will come before 4 Horsemen Pvt Ltd. because we disregard the t and f in twenty and four respectively.

You’ll file numbers in the same way you would file alphabets – in ascending order – that is, smallest to largest.

If the numbers are spelled out, they’ll be treated as normal words and filed alphabetically.

Initials are considered separate units and are also filed alphabetically. So, if you have to file J.K. Smith and K. Nyugen, J.K. Smith would be filed first.

But what if the initials are same, like this: J.K. Smith and J.K. Nyugen. In this case, J. K. Nyugen will go first because we are looking at each letter (including the initials) by their designation. That means if the first letter of their surnames were same as well, we would then look at the second letter in their surname. So by that logic, J.K. Night would come before J.K. Nyugen.

Articles are words that describe the noun. In the English language, there are three articles: the, a, and an. You must ignore these while alphabetizing.

Example: When alphabetizing A Face and The Arm, The Arm will become before A Face.

Make sure you do not confuse the article “a” with an initial.

FYI: You can ignore articles when alphabetizing a list using the alphabetizer.

When symbols are part of a unit such as a name, they are spelled out. So $ is seen as Dollar and ! is seen as Exclamation Mark.

Alphabetize them as you would normal words.

Interested about learning more about how alphabetization works? Check out our article on History of Alphabetization. 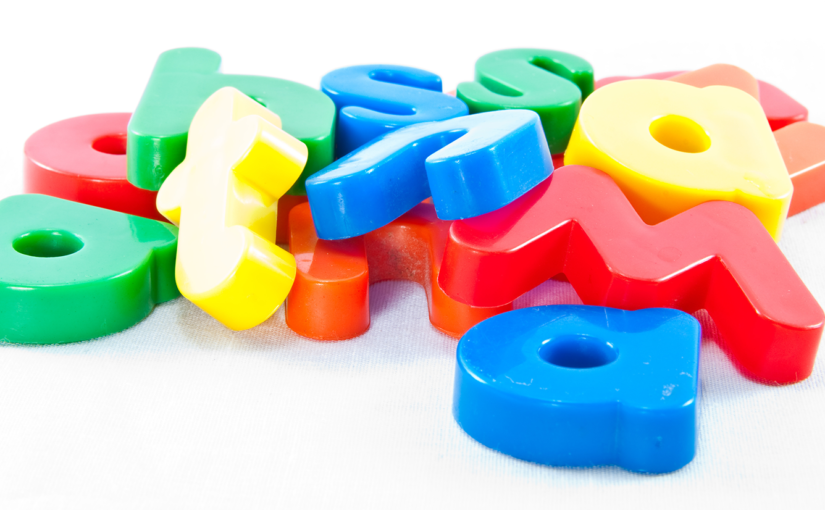 Why do we need to alphabetize?

Even in our modern digital age, alphabetization plays an important role in our every day lives.  From looking up a contact on our iPhone, to finding a CD in a music store, (they still have those?) knowing your letters is a valuable skill that isn’t headed for obsolescence any time soon!

A few reasons we need to learn how to alphabetize a list include:

How to Teach Alphabetization?

Many teachers teach their students how to alphabetize in four steps which slowly build up their familiarity with the alphabet, ability to recall the order of letters, and ability to alphabetize by more than one letter at a time.  These stages are as follows:

In the first stage of learning to alphabetize, children who are already familiar with the alphabet will practice putting letters in order.  Typically this is done with tiles or flash cards that contain every letter of the alphabet.  Children are asked to put the tiles in order, or are asked to put the letter down which follows a particular letter, by reciting the ABC’s and figuring out which letter is appropriate.

Stage 2: Learn to Alphabetize Words to the First Letter

Once the child becomes confident organizing the letters of the alphabet, they will be able to learn to alphabetize words.  This can be done by putting words on pieces of paper or flash cards and pointing out the first letter of each word.  Then those letters can be circled and compared to other words and sorted accordingly.  Having the alphabet on-hand can also be useful in case the child forgets the order of letters.

Stage 3:  Alphabetize to the Second, Third and Fourth Letters

At this stage, students will be presented with words that begin with the same first two, three or four letters.  They will be asked to compare the words until they find differences in the lettering and to determine which of the differing letters come first and and which position in the word they occur.

At the more advanced levels, students can learn to compare surnames with unique capitalization, how to sort a list of titles by ignoring articles, and other advanced rules for alphabetization.

Alphabetizing is still an important skill, so work with your children on it.  Who knows when an electromagnetic pulse will permanently disable all our electronics and we’ll be back to doing things the old way!

And be sure to check out The Alphabetizer for help with all your sorting needs! 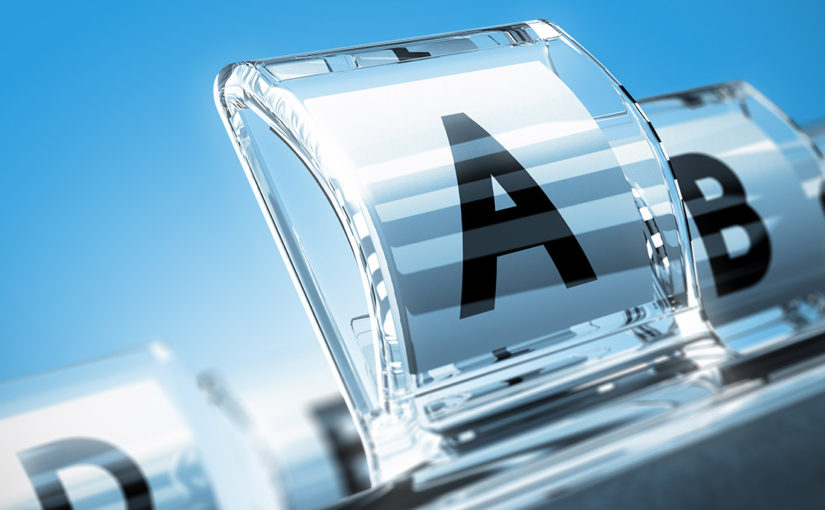 Well, after theunderwhelming number of cries for a blog for The Alphabetizer, I’ve decided to begin.

Truly, nobody really cares whether The Alphabetizer has a blog or not.

Unfortunately, to stay abreast of the SEO game, we’ll I’ll need to waste some time every week writing pointless keyword-packed articles about alphabetizing, alphabetization, sorting lists, sorting by last name, and perhaps some tutorials on how to sort in Excel and sort in Microsoft Word.

As always, if you need to simply alphabetize a list, you can use The Alphabetizer at https://alphabetizer.flap.tv.

God help us all.  And to our search engine overlords…keep scraping by.